Americans in the Philippines at All Saints Day

My affinity with the  Americans is not by accident but by consequence. That consequence connected my thoughts when I visited the American Cemetery yesterday. Much of the tombs of the Americans were left un-visited---perhaps for decades. I asked myself, where could be their families now?  Does anybody remember them?

I can trace my American affinity –consequence theory to my parents who were both naturalized Americans, after both served the United States Armed Forces in the Far East. My parents lived in America, as well as their sisters and brothers, years after the American-Japanese war was over in the Philippines, where the Filipinos fought for the Americans against the Japanese. Eventually, more than half of my family migrated and lived in the USA. The American-Spanish war in Iloilo forced the Spaniards to leave our city, thus, Iloilo became the last bastion of the Spanish Empire in Asia. Iloilo was occupied by many the Americans after the war. They specially build schools which the Filipinos were deprived of under the Spanish occupation. Along with that, the Americans took American Protestant Christianity melding with the Roman Catholic religion from the Spaniards. In Iloilo City, this interesting blend can be seen in our town square of  historic Jaro district, where the first Evangelical Church built by the Americans was built beside the Iglesia de Nuestra de Candelaria Roman Catholic Cathedral built by the Spaniards.

My mother went to Central Philippine University (CPU), an American Christian school, established by American missionaries in Jaro in 1905, My father was a true blooded Roman Catholic. So this melding made it interesting for us in the family. In fact, one of my grandmothers was a Seventh Day Adventist, another twist.

My fondness for Americans had it roots with some of my American classmates. The bridge to like anything American was also because my mother adored the Americans like she was the number one fan of President John F Kennedy. Her mentors and teachers were Americans. Her English was purely American. Her friendly ways and strong personality was American style. The American missionaries sent her through college, like her sisters, as working students at CPU---like washing dishes at school dormitories. She always said, it was the Americans who taught her how to live life through education.

As I young boy, my older sisters only listened to, forcing me to listen to,  American songs only--name it, Frank Sinatra, Bing Crosby, Ella Fritzgerald,  Julie Andrews, Barbara Streisand, The Mormon Tabernacle Choir, The Chipmunks--even as we lived so far away in my mother's home town in idyllic Estancia, a fishing town, which when I was a young boy, I thought was at the edge of planet Earth. It so far away from America. Yet my mother  listened to an American radio station, the Voice of America,  every night,  beamed in our old transistor Radiowealth brand radio held up together with glavanized wire as it was already disintegrating.  As a young boy, I heard American voices talking over our radio the whole night, well, as if  I understood everything like my mother and older sisters did. But I loved that experience. Being global during that time in the 60's was not a bad idea at all.

Anything American was all over us then: American Peace Corps, American films, American soccer, American goods including my mother’s collection of American goodies donated by USAID such as woolen blankets we can not use in the hot climate of the Philippines. At school, we were fed with American milk along with super huge and heavy “nutri-bun” bread which made our tiny “pan de sal”  to shame in size.

The American milk was so thick and bland for our standard, when our teacher was not looking, we poured it over the classroom window feeding the plants below it instead. I guess Filipinos still prefer our ginger tea or diluted and sweetened home-made chocolate which when served, one can see the bottom of the cup.

One sunny day in Manila, I was manning the store I worked with as a designer when I met a handicapped American, a lovely sweet lady in her late 60's. She was working at the US Embassy in Manila. I shared with her my father's story, whose ear drums were damaged by firing cannons as Captain of the American Armed Forces in the Far East during the time of the Pearl Harbor attack of the Japanese.

She too suffered during that time, she said. I noticed she was limping.  She had compassion to family members of veterans like mine. She invited me to the Embassy, gave me an American visa even before members of my family did get theirs after their petitions and immigration applications came.

It was a great deed with what the American lady extended to me that perhaps my father had been repatriated as well through me. Years later, I travelled back and forth to America, for work like shows and exhibitions, study and seeing my family members and relatives.  Even today, I work as a consultant for the USAID in the Philippines and in South America for the past several years. 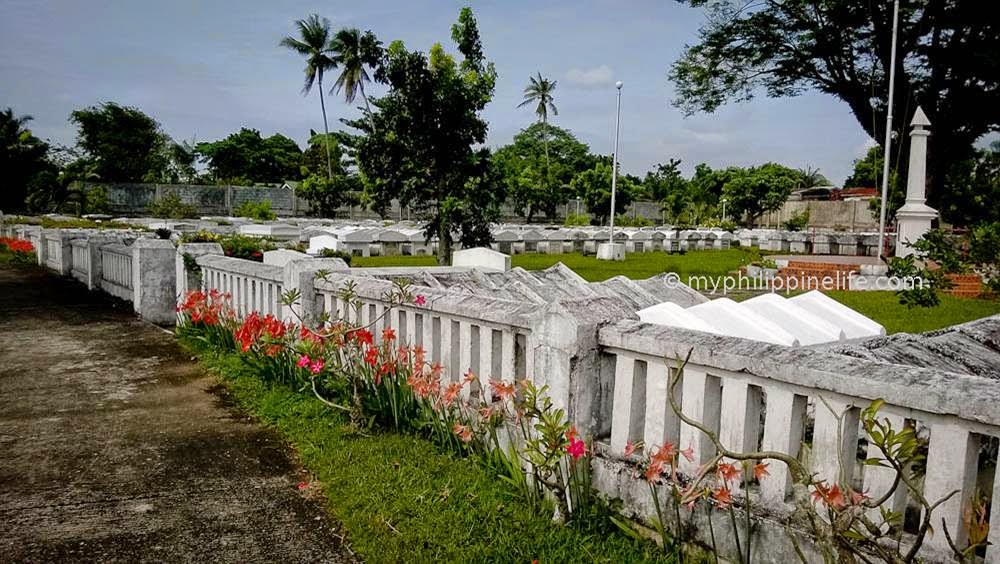 The American Cemetery in Iloilo City reminded me of all things Americans in the past --and how we will embrace them today—and the future. After returning in residence in America,  my parents final resting place were at the American Cemetery in Jaro, Iloilo City. That images  of my father's wake covered by an American flag in Philippine soil was something which transgressed the history of these two nations.

What made me think deeply was that every All Saints Day—rows and rows of American tombs were un-visited. Not a single flower nor a single candle on them. There are rows of American babies at rest in the cemetery. Certainly, these babies  are angels singing up high in spite they are  forgotten on Earth at this cemetery. Yet, this is a testimony that took great sacrifices for Americans in their relations with Filipinos which the history of our own little  town  can not just ignore.

My sister and I  offered some candles to the soul of these long forgotten tombs of our American brothers. We only had few as they were too many for us to provide.  Next All Saints Day, I thought I will create a volunteer group of Ilonggos to offer flowers and candles to all  Americans in the cemetery. After all, each one of  them deserves a restful place in our land. They, too, made our land what it is today. Indeed, a gesture of mutual appreciation both in Heaven and on Earth, in the past and today. Certainly, for many more years to come.