The Ocean Floor Is Like Our Lungs We Can Not See

I am writing about what my fellow Ilonggo Rock Drilon has posted on facebook about a deep water sea fish called Oarfish washed the second time in nearby province of Antique which is beside my hometown Iloilo. It is a rarity, even in many parts of the world, oarfishes are washed on shoreline.

Why this oarfish surfaced on the beach, I have some probable reasons why.

1. The quality of land will affect the quality of the sea especially the ocean floor—the bed rock of our garbage and pollutants. Human recklessness to nature invades the unseen. Contaminants can harm any living creature.

2.  The ocean floor is the barometer of our geological conditions including
tremors and earthquakes. Nature itself can tell what is next to happen, like frogs croaking for the rain to come. Oarfishes in Japan indicate there will be a forthcoming earthquake.

3, Climate change. It has been a fact that because of global warming, sea creatures are confused in which some fishes find themselves alienated to the ocean conditions and migrate to where it is not their geographical abode. , ex. Tropical Lion fishes living only in Indo-Pacific Ocean have migrated to the  Western Atlantic, Caribbean, and Gulf of Mexico. It is something a mystery to scientists until today.

4. Man inflicting injury on sea creatures with materials things including broken fish nets and ropes. I assume looking at the picture the oar fish is highly battered with physical injuries and its head gone. Oarfishes are deep ocean fish and swims slowly ( due to its length and heavy weight) and can be carried by under currents and washed to shallow waters. Global warming is also on the ocean floor where nature can take its toll without us detecting it. Animals there can.

Scientists may have to trace where the Antique oarfish came from, ex., from which sea? Japan? South China Sea?

Possible causes this fish was washed to the shore:
(1)      The Simirara Island mining in Antique may have its chemical pollutants in the ocean floor as well and it affected it. It has its huge problems in environmental compliances in many years as news reported it.

(2)      This fish was most likely  trapped in a strong broken fish net in the ocean floor ( as they are deep sea creatures) and or ate plastic garbage, it died, and washed away. (SEE MY COMPILED PICTURES). 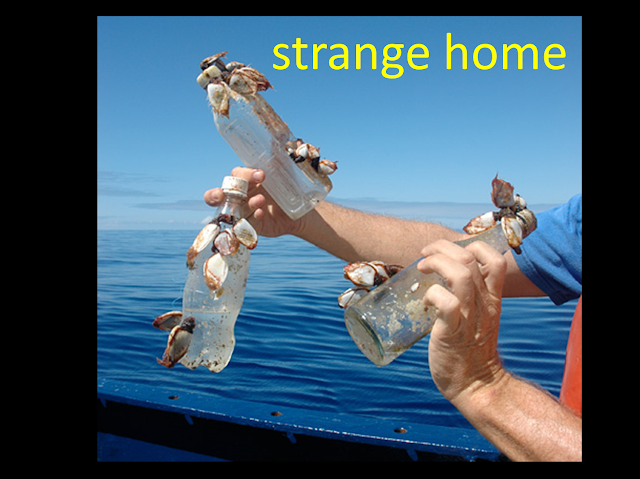 (3)      Old age ( perhaps battered by ocean floor movements ex, tetonic plates, so it died).Ex, we had recent earthquakes and tremors in the country and abroad.

(4)      Seeking for food that is no longer there in the ocean. Oarfishes actually just eat small crustaceans. So when we deplete them, or any other fishes,  with their food it is because we abuse the food cycle of marine creatures by over fishing what could have been food for them.

It is a principle in environmental science that WHAT WE  SEE IS ONLY ON LAND, BUT WE DO NOT SEE IS UNDERNEATH THE OCEAN. This is the most dangerous lesson man should learn from  our abuses on land, that our ocean bed is the catch basin of all of pollutants and plastic garbage.

Ergo, all cities in the Philippines being a coastal country, including Iloilo City which has mounds of unsorted garbage including plastics should create awareness and implement zero dangerous wastes dumped on land and may eventually end up to the ocean.

If one visit the areas near Sooc, Arevalo it is full of plastic scattered all over the place and rice fields. Sooc connects to Iloilo River and up until the Iloilo Straight (between Guimaras and Panay Islands) on to the sea and on to the ocean. Nature is not confined. It is an eco-system like our human body. Got a tootache? Your entire body can not function as well.

I work as a volunteer in Sooc and created a project there called Project Zero to upcycle used tarps and plastics in the city. Yet the entire Iloilo City and others in Panay except Boracay Island do not segregate its garbage yet. Let us not wait until the super cities in the old Iloilo airport rises to fill up our garbage bins with yet unsorted garbage.

Our solid waste management is not in place as I saw a facebook complaint about the methane gas emitted in Calajunan dumpsite in Iloilo City. Our landfills have pernicious smell and full of hazardous elements as we do not segregate our daily wastes at all. All batteries, corrosive materials and plastics are mixed up with biogradable garbage which could be recycled, ex, backyard garden fertilizers,  and need not be collected by trucks which will reduce Iloilo City its costs of hauling solid wastes to the dumpsites. There are easy solutions. It starts from our own homes. We dispose our garbage properly remembering we do not, our friends in the ocean will just all die.

I once wrote in facebook, the litters at the Iloilo City port which may be thrown by the locals and the tourists. And by its sheer promixity to the ocean, will all settle in the ocean floor. I suggested then in that post that the City should already impose  an anti-littering bill, having been successful with its anti-smoking bill. A tooth for a tooth because others are so stubborn. Of course, I personally will be happy, if the city stops all its fondness for tarpaulin billboards placing them just at any possible empty spaces including our plazas. I recently posted in my facebook this concern.

In Boracay, no one will collect our garbage if they are not segregated at all. I can attest to that becuase I am a business owner, member of Boracay Foundation and resident there for years.  We commissioned the UP Visayas College of Fisheries and Ocean Sciences to study the marine eco-system of Boracay . The scientists gave it a very good grade for its ocean floor which is very clean. Its corral reefs and sea grasses are very healthy.  But on the ocean floor, they collected garbage specimen of “Chippy”, “Boy Bawang”, “ Stork”, “ Snow Bear” plastic wrappers and department store  plastic shopping bags--- all of them are of close affinities to locals who throw these on land and washed to the sea. Of course, these can be mistaken as food by sea creatures. In Hawaii, not a single plastic is allowed. In Makati, there is a stiff penalty for stores using plastic bags except on  wet food items.


I was commissioned by the Metro Manila Development Authority and the Manila Mayors Spouses Association with  CITEM to create livelihood through Crafts Ecology in all Metro Manila districts by upcycling garbage to useable utilities. It is also teaching citizens the importance of  how our ocean will suffer with our garbage on land.

As member of the Society for Sustainable Tourism and Development Inc (SSTDI) with pilot project in Coron, Palawan teaching all to attain excellence in sustainable development, environmental conservation and stewardship to help mitigate climate change by implimenting green solutions. it starts from people being educated on this concern and this becomes an everday habit, not really imposing archaic rules which usually become co-terminus with public office.

I share with you all some of my lecture slides related to the symbiotic relationship of land and sea which I presented to the organic rice farmers of Zarraga Integrated Diversified Organic Farmers Association in Iloilo last week. It taught them the value of sustainability being not confined to any specific territory rather as a matter of global concern with each dot connected to one another.The farmers appreciated how they need to stop horrendous amounts of  chemicals and pesticides for decades which certainly can be washed off shore and will affect the quality of water in our ocean, too,  to an irreversible effects to all animals in the sea.  I shared with them the principle that "Anything thrown on Earth, will stay on Earth, they will not be thrown to the Moon or planet Mars". They will remain with us.
To some, the oarfish washing in Antique can be an ominous sign-giving the impression that somthing bad is going to happen. We will lose nothing if we are warned ahead of time.

PJ Aranador is a graduate of Biological Sciences from the University of the Philippines. He was the past consultant of Go Green Philippines with projects on upland and marine conservations in Cebu City. He is one of the current consultants to the United States Agency for International Development Advancing Philippine Competitiveness (COMPETE)on key industries (Tourism, Agribusiness, Manufacturing) Component.  He was the design consultant on sustainable and green manufacturing for MSMES for the Iloilo Provincial Government projects on Northern Iloilo Local Economic Development (LED) with DTI-Iloilo.  His advocacy for green and sustainable design for better life in communities by helping his own people made him return in residency in Iloilo City.
Posted by Life and Style at 22:13 No comments: