The Iloilo Provincial Office through its Tourism Planning Office was able to pull a beautiful exhibit of the costumes of Dinagyang from several past participants and I enjoyed it a lot, so did many visitors, mostly Ilonggos. What elated me most is that the children and their parents enjoyed the experience much more than they would see the street performance where one can not see much.

The entire experience is that one can touch the costumes and look at it closely. I did. I was amazed with the craftsmanship and details of the works. What  is amazing was the use of local materials. The ethnic Filipino patterns that bridge our modern thinking  with our past.

The colors were so  tropically alive and it was just perking up the Filipino fondness for what is festive. I will try to present some picture essay here.

On the other hand, perhaps, this exhibit is a testimony that Filipinos can do their own costumes well, too, with the advent of the disappointments of Filipinos with the national costume of our Miss Universe 2014 representative  which was created by Colombian designer Alfredo Barraza. What he designed may be ok in form as a mestiza or terno cut but the materials were downright cheap and un-Filipino. In the first place, Filipinos are not noted for using roses used in that said costume. Ours is more ethnic prints, stripes, callado, bead work and handloom.  While these intricate works on exhibit are mostly done by non-designers, I guess done by local community members and schools,  looking at the works,  they express the true essence and spirit of what is Filipino creativity in costume design which is detailed handcrafted embellishments.

The quality was not as tip top, but it is all about creativity. The artisanal spirit was impressive.

Although, the silhouettes are really fantasy, rather than indigenous, although some reflected our tribal forms from North to South of the Philippines,  the collections were outstanding specially those using our local weave “hablon” and “patadyong”.  As a note, the Dinagyang festival costumes, should be categorized into “fantasy” design, those with influences of Africa or Latin American and the other is “indigenous” design, those which are really Filipino tribal, folkloric, colonial and regional. Dinagyang should consider these two categories in order not to confuse our young people since Ati-atihan is about the nomadic Aetas who wear only “patadyong” and “bahag” (loin cloth). Somehow the Dinagyang is becoming like a Brazilian mardigras---except those with design sensibilities like the original tribes of Barotac Nuevo Iloilo who once came only in their “bahag”.

I was once asked how to create a distinct Filipino costume, and I said, it has to be material first and then material manipulation next  with our own indigenous resources –something that is truly ours like coconut beads, abaca, pineapple fiber, raffia or bamboo, as some costumes with Asian or Hispanic origins have some things in common. 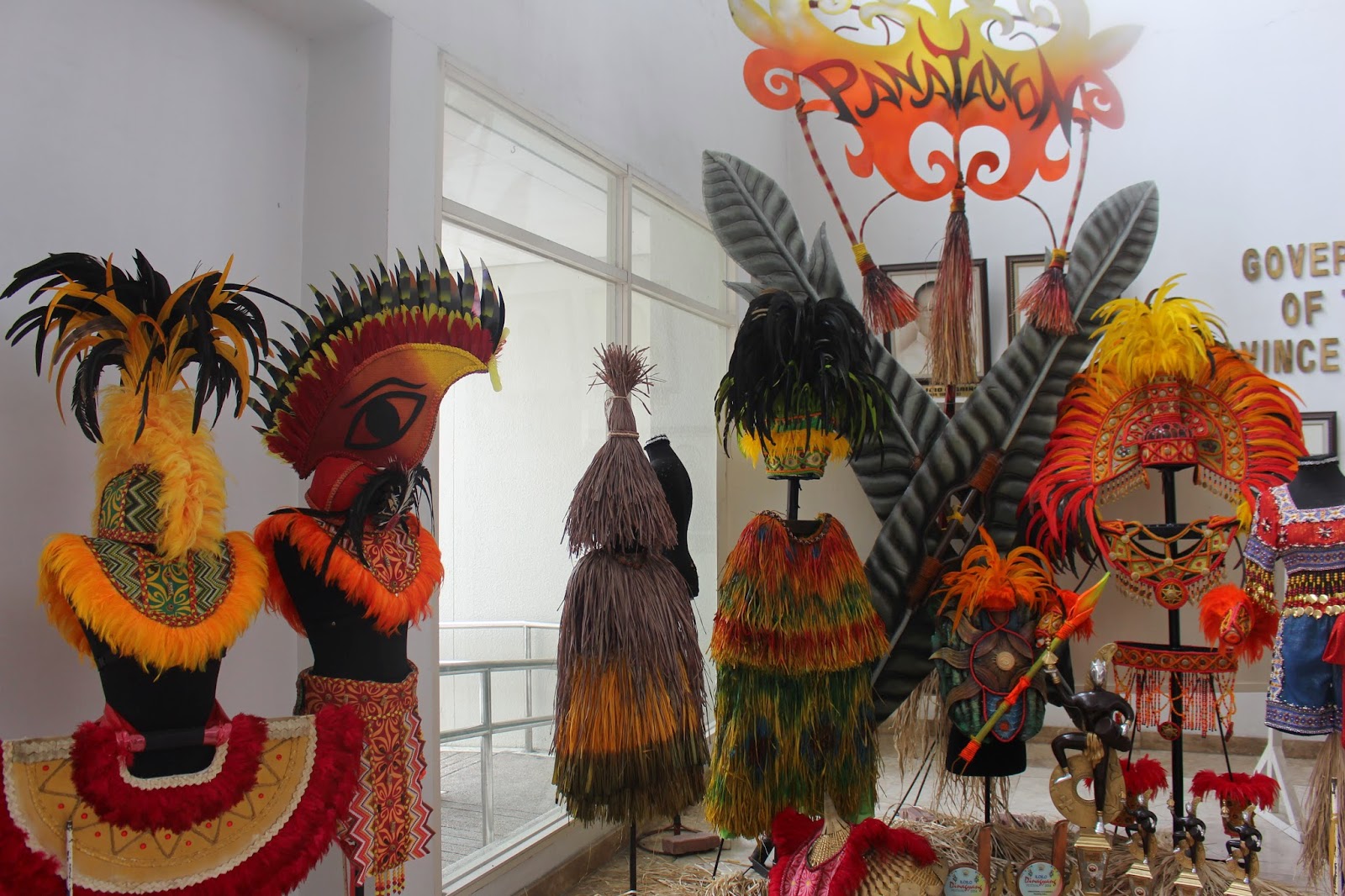 I learned there was a n exhibit of all of the Philippine festival costumes on the same venue but I missed that one as they were taken to the streets which is also a fantastic idea. The Philippine festival costumes certainly are the richest, most diverse and most beautiful one could imagine. They, too, tell many stories of who we are and give us a sense of pride as a Filipino race.

I must congratulate Mr Bombette Marin and his team at the Iloilo Provincial Office of Tourism for this exhibit. What a joy to see many families with their kids were happy to see---and touch---the soul of Iloilo in these well made festival costumes. 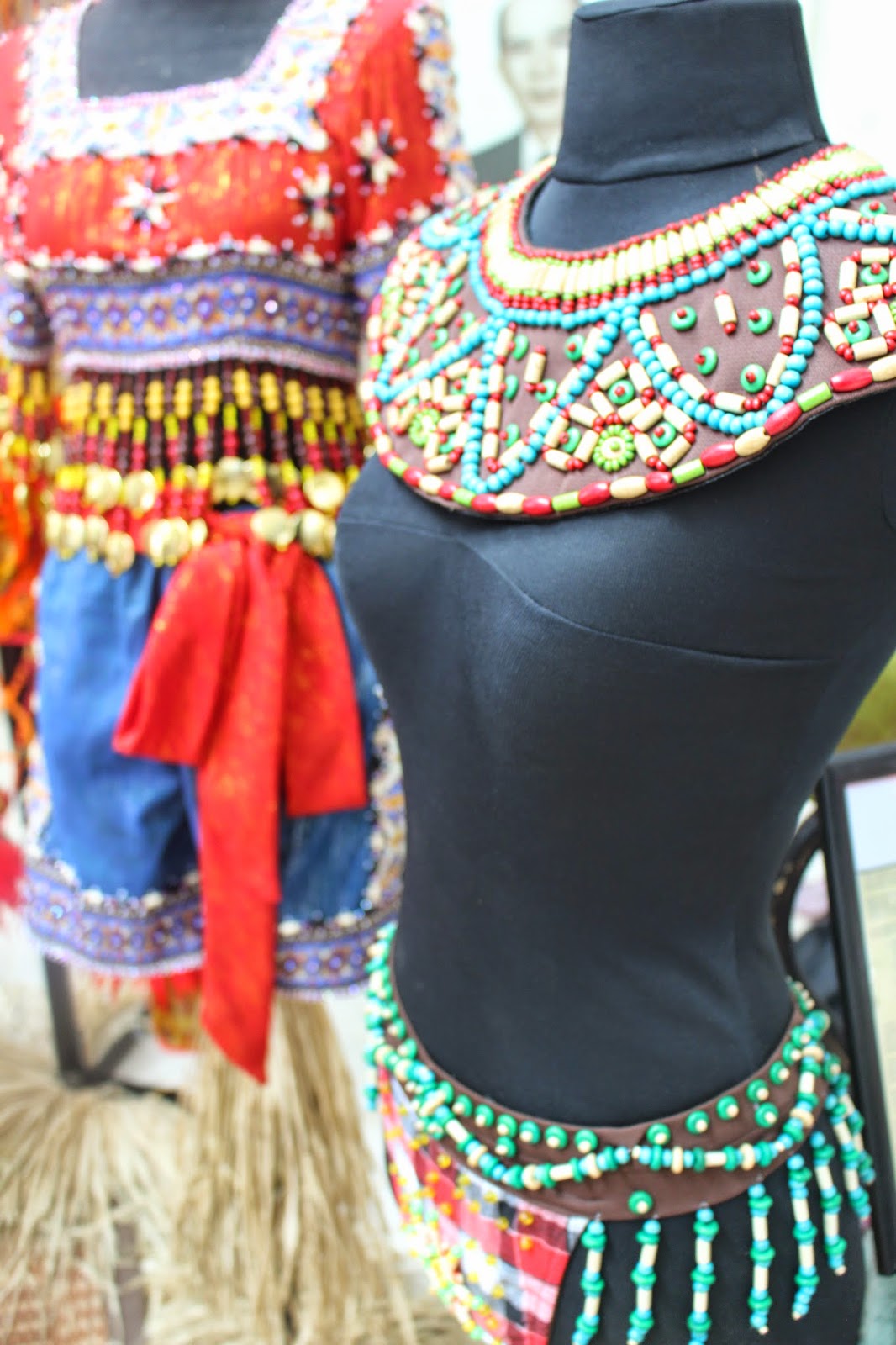 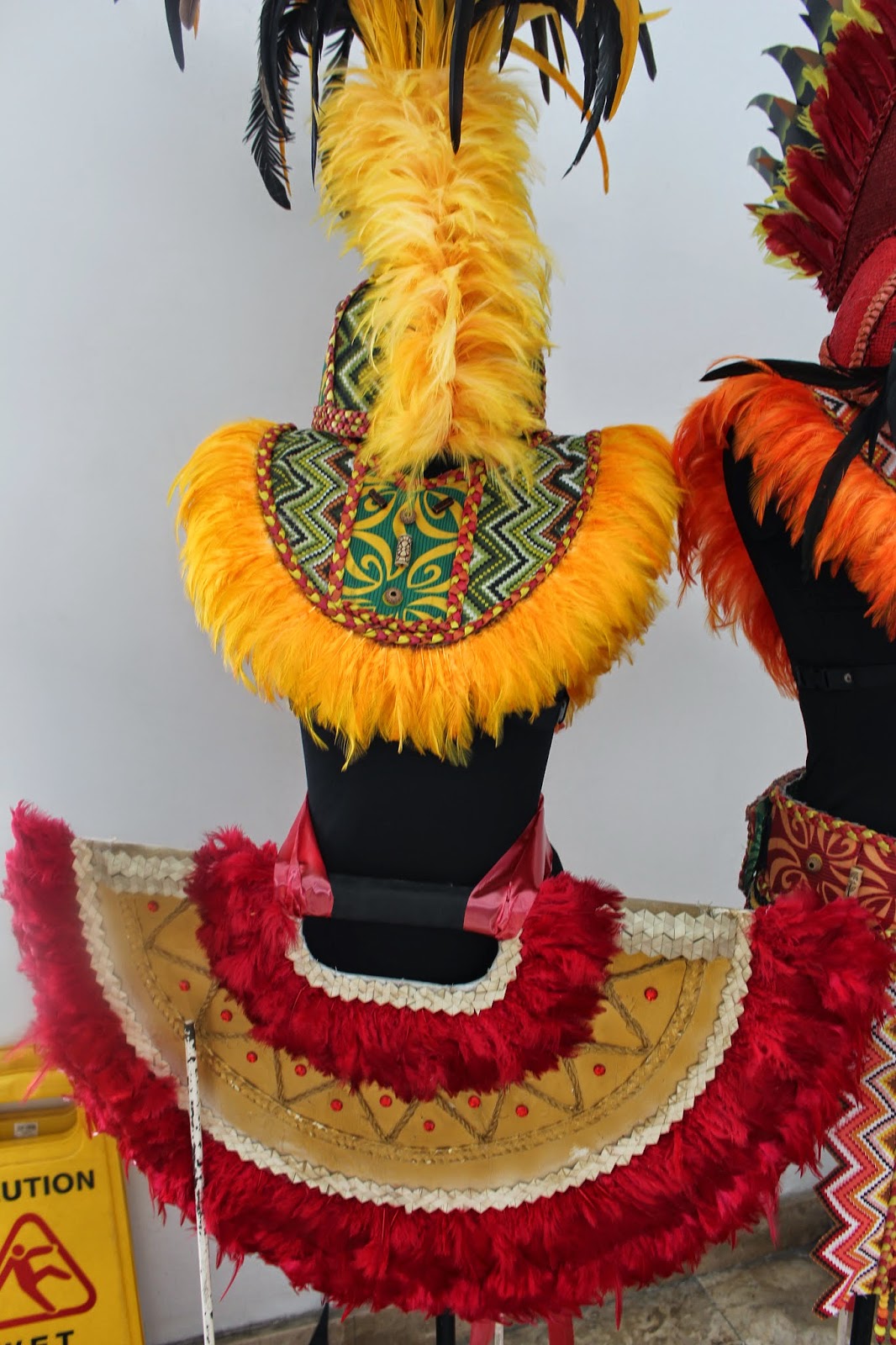 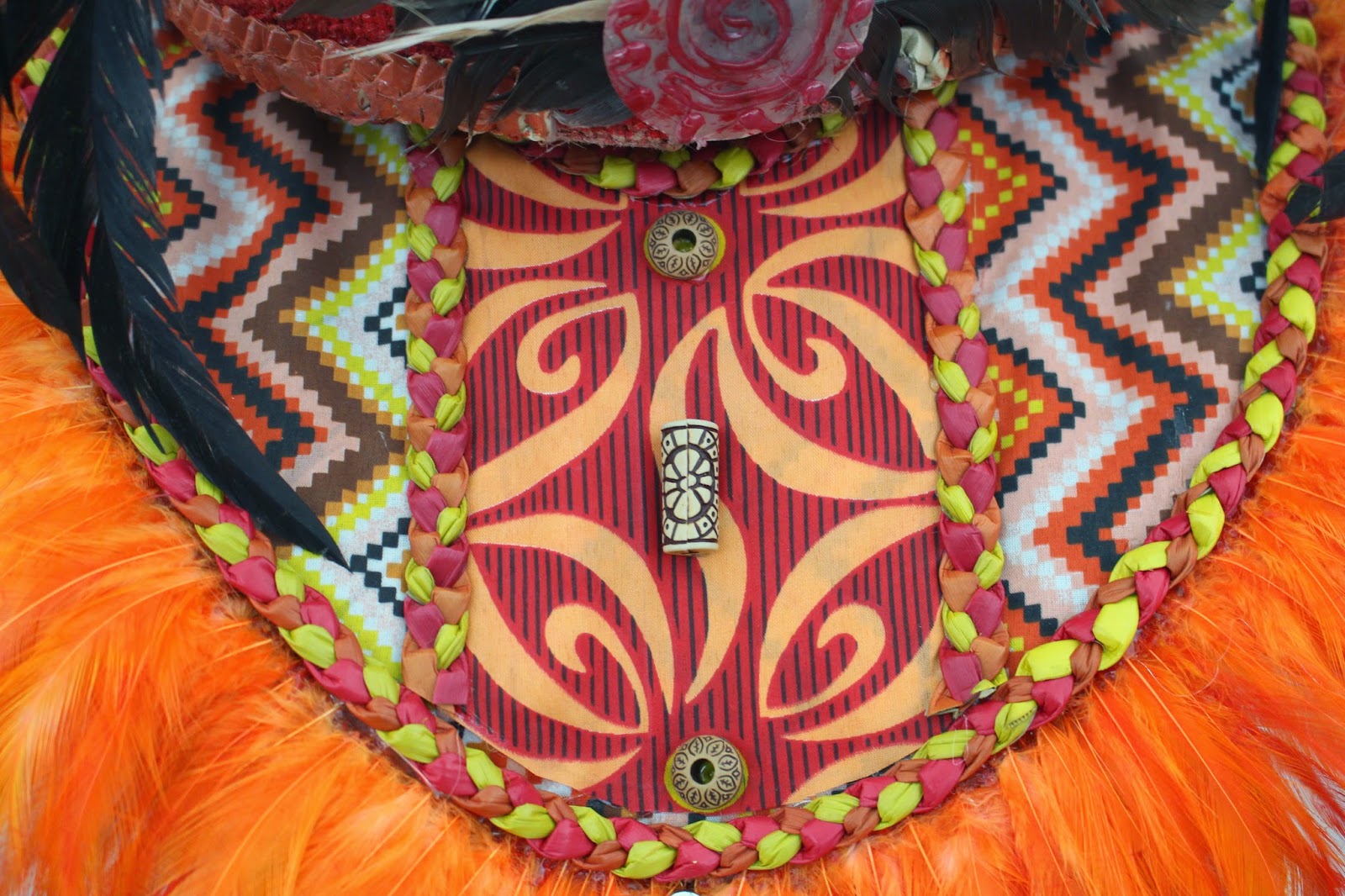 As an Ilonggo, I am obliged to share my sentiments with my fellow Ilonggos and those visiting our festival--the Dinagyang. Nobody will help our city and province, except us, the Ilonggos.  Not that I criticize, but to contribute solutions to how it can be improved.

I really did not want to see the festival this year because I knew I was not going to see anything anyway--- and I was correct. I did not see nothing. Well, I went downtown,  because I wanted to see the costume exhibit at the Iloilo Provincial Capitol ( see separate blog)  where I saw a lot than at the street performance.

THE BIG QUESTION REMAINS. Do we need money to see our own festival? Why is the festival a fiesta for the rich who can sit at the grandstand with their tickets while the poor just look at each other?

ANTI- POOR
What is wrong with the festival is that it is really anti-poor. One needs money ranging from Php 50 to 2,000 to be able to see it. Scalpers will allow people to stand on a stool to see the barricaded performance area from Php 50 to 150 pesos which is useless as one will see nothing from behind the performances anyway. For higher scaffolded platforms, one pays Php 250 and above and the income does not go to the city. Those who are rich can be at the grand stand and sit like a king because they pay so much.

Poor people coming from far away places, who comes in families with limited means just to entertain and treat their children, just end up miserable.The images I see of the poor at the festival defy the stand for the embrace of the poor by Pope Francis. 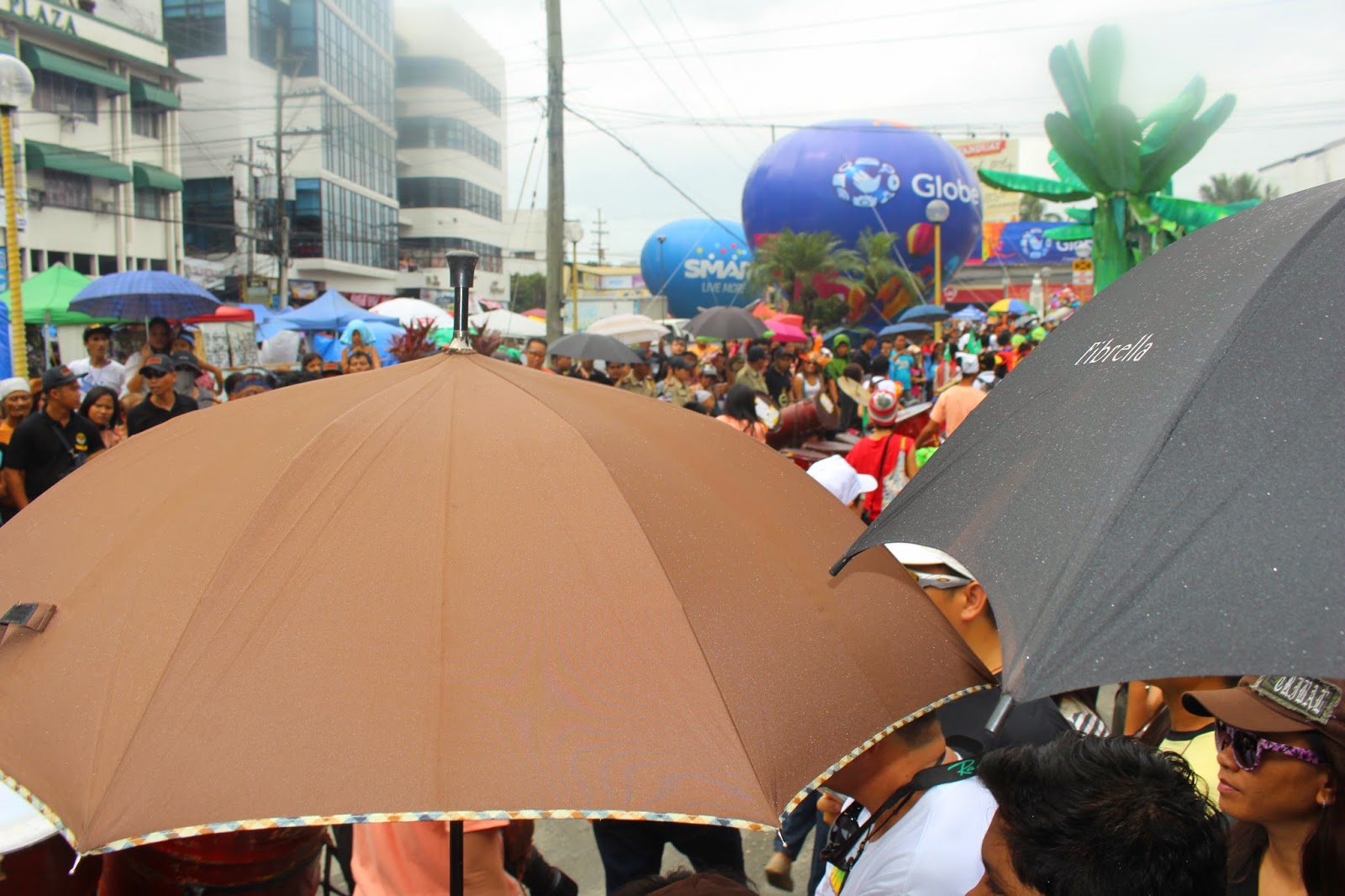 A sea of people struggling to see something


ANTI-SENIOR CITIZEN/ ANTI- HANDICAP
Many of the aged, are desperate, nothing to see at all because of the thick layers of people blocking the way. They are pushed to the limit. Many teary eyed for not seeing anything--perhaps their only sentiment is to be proud of what we have to offer but now can only be for those who have the money.


ANTI-CHILDREN
Those family members with kids struggle, some parents put their kids on their back for them to be able to see something, but how long can that be? Still, one can not see all those monstrous props that block the view. 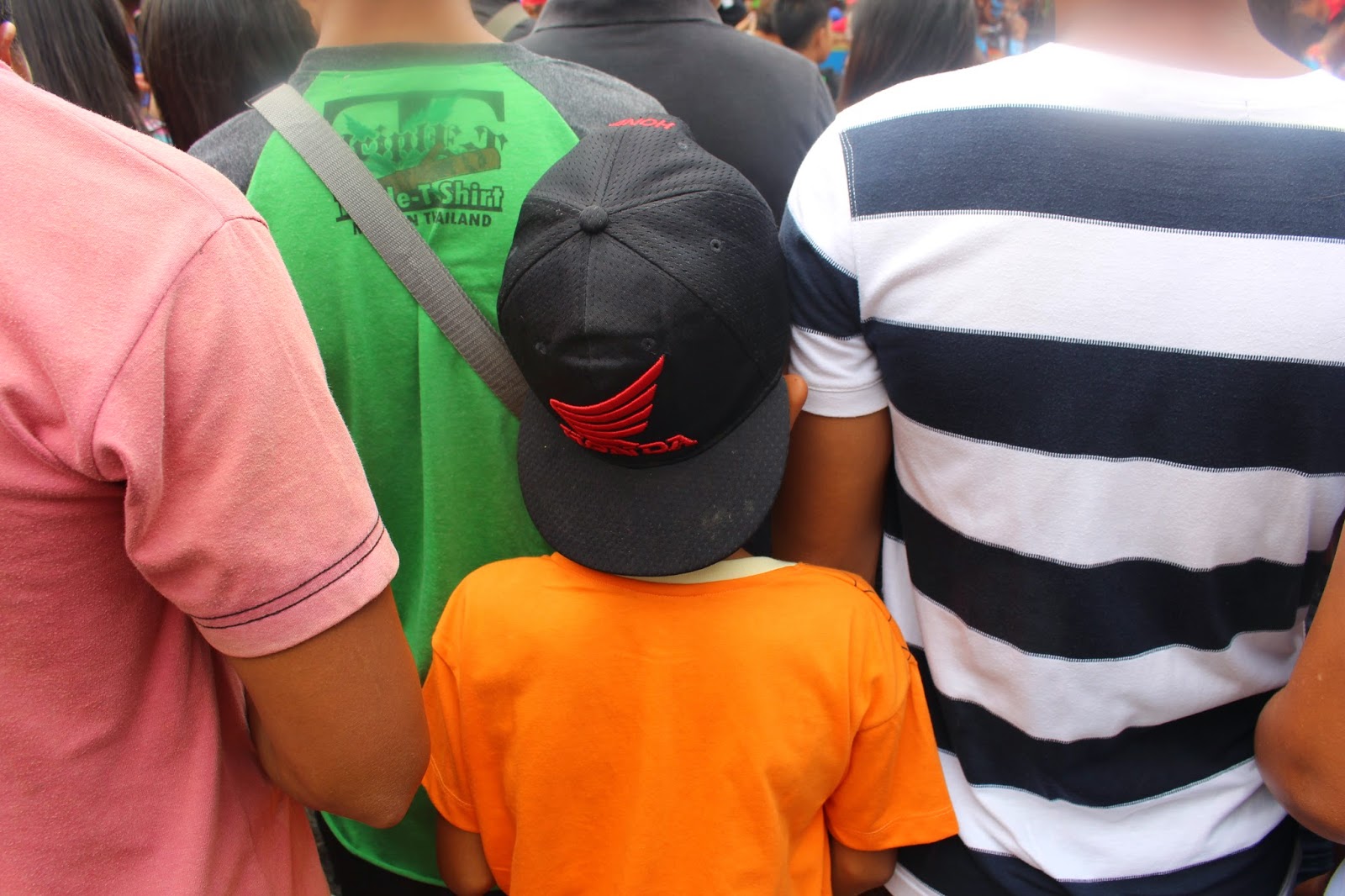 A kid trying to peep to see something from layers and layers of people. What a frustration for young people who wanted to see our own festival and see nothing. 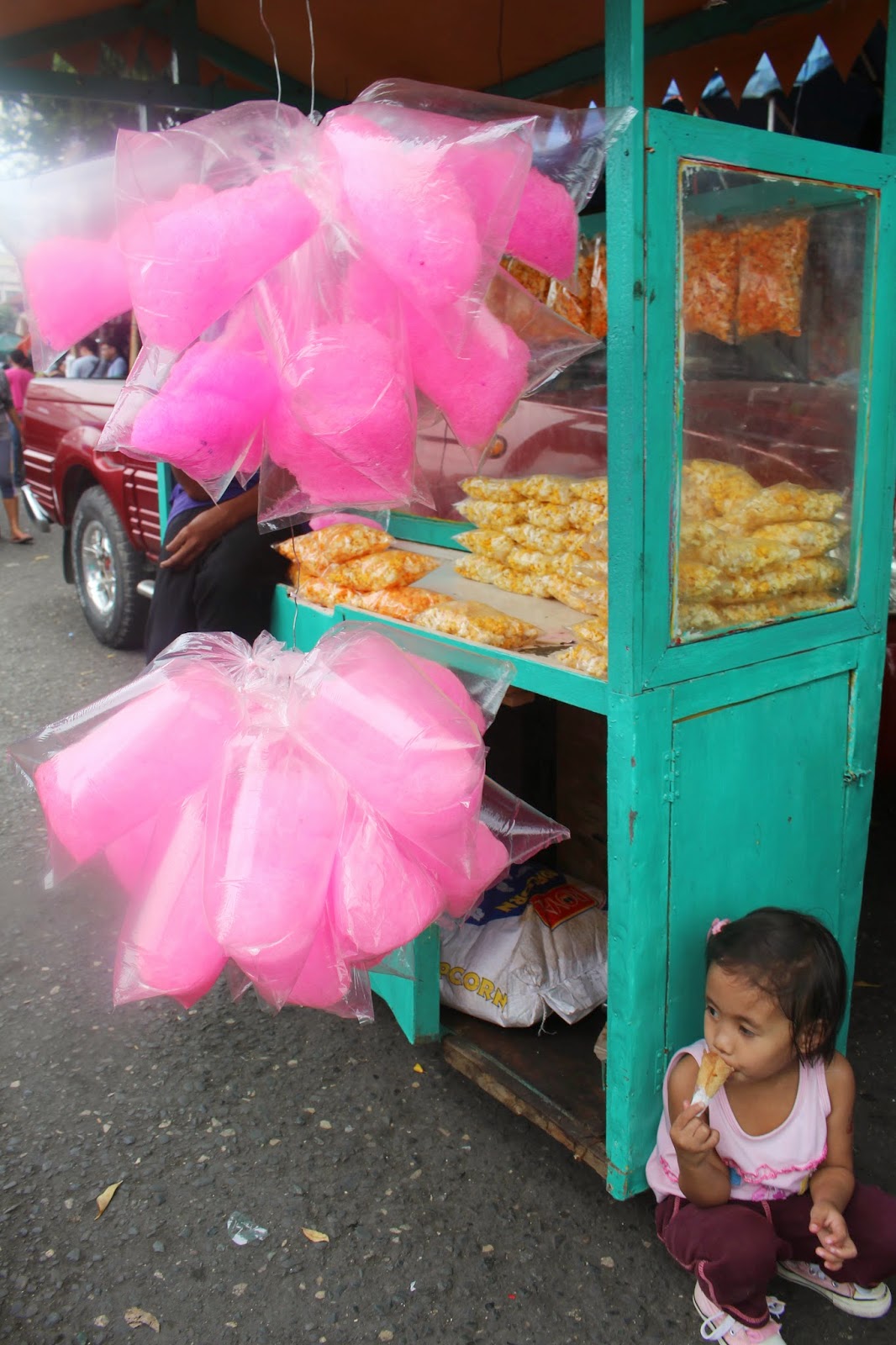 A kid  finds her place rather than struggle to see something 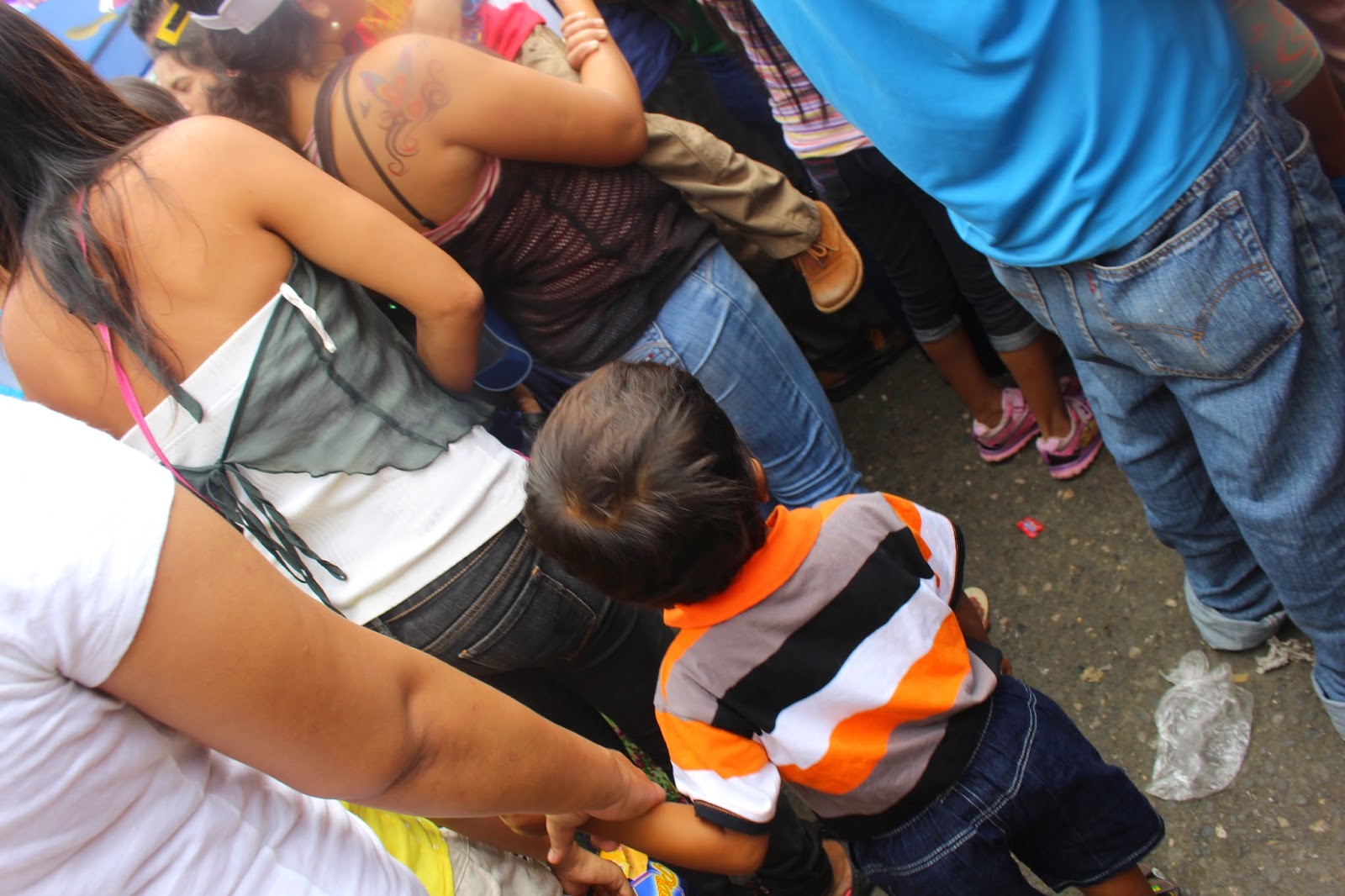 Will always break the heart of parents with their kids seeing nothing.....all these years!!!!

ANTI- AUDIENCE
In general, while the city will earn for paying audience at the grandstand, the Dinagyang organizers should realize that those at the back of the performers do not see anything because of the props. After each performance, the performing tribes, just walk away until the next performance stop, unlike in the past, they will still dance indefinitely.

PERFORMANCE FOR THE JUDGES AND THOSE WITH MONEY
The performers, perform for the  select few, the judges and those with money,  unlike before where they dance on the entire length of the streets and everybody see it. In the past, the entire Calle Real, one can see the crowd cheering for their favorite tribes.I remember the MaMao Tribe in the 70's--they dance for hours in the street for all to see and they were given points for endurance.Today, we only struggle with elongated necks and arched heels--yet there is nothing to see so we can not even cheer. The tribes, WALK past people. Que horror. 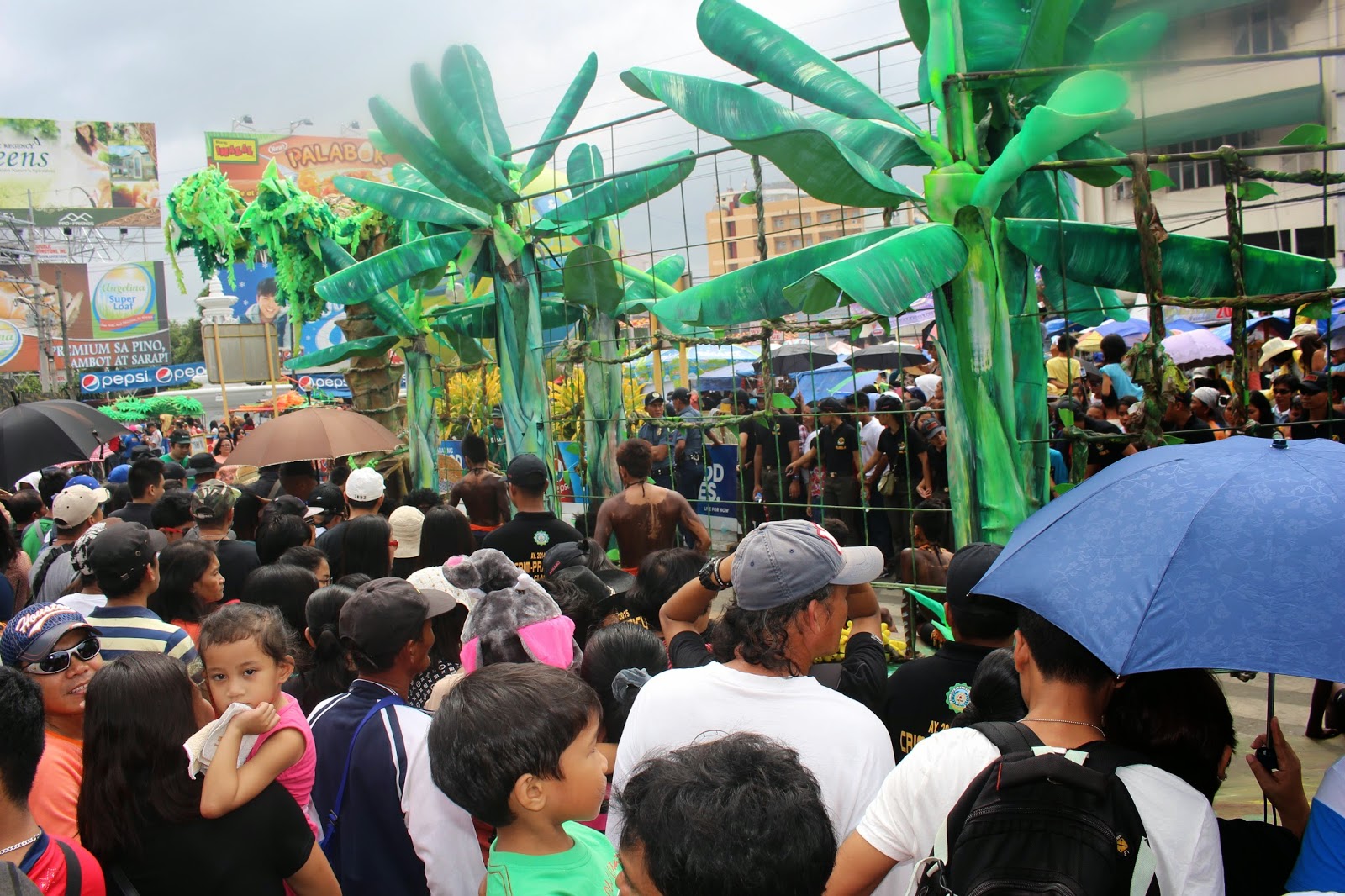 BARRICADED FESTIVAL
Fiestas or festivals in Philippine tradition, or for any country, is a gathering of people, young and old, rich or poor, not to barricade its citizens like in Dinagyang. Festivals have to be free flowing, not creating fortresses like Dinagyang did. One foreigner was saying it is a festival with so much military, too--he got scared asking if something is wrong-- because there was just too much men in uniform, when Ilonggos are one of the most disciplined people in the country ( see picture below).


MINDLESS RICH PEOPLE
There were cars of rich people who entered the no car areas and emitted their fumes to people. Why were they exempted? Do they know that there were very small children walking and sitting along the streets? How can they pumped their carbon monoxide to these people?

I took the jeepney from Jaro to La Paz and walked from La Paz all the way to the Provincial Capitol by foot. I enjoyed it. Why rich people had to exempt themselves were grossly in-human and unfair to all. 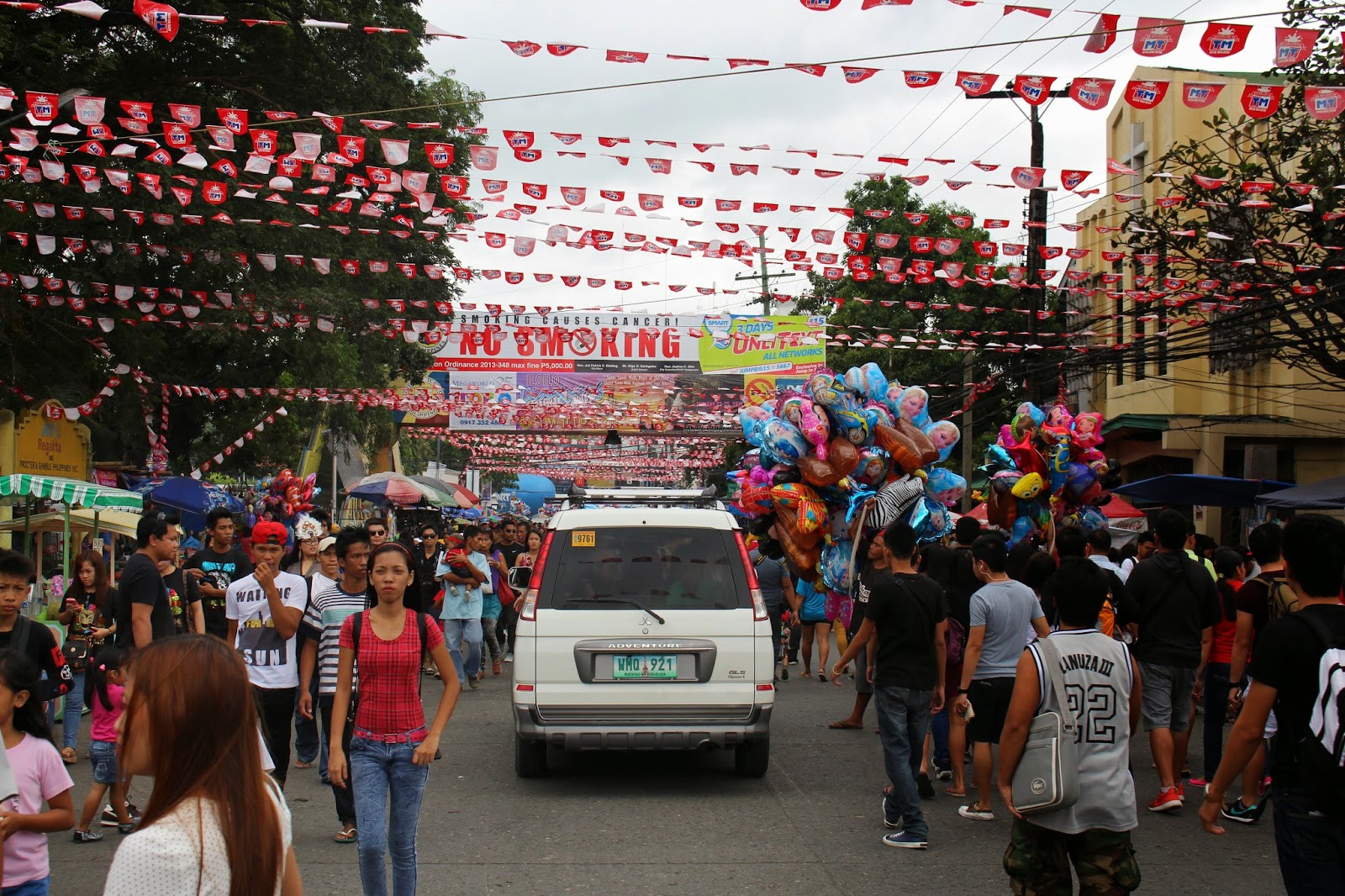 A solitary vehicle emitted fumes to people and children 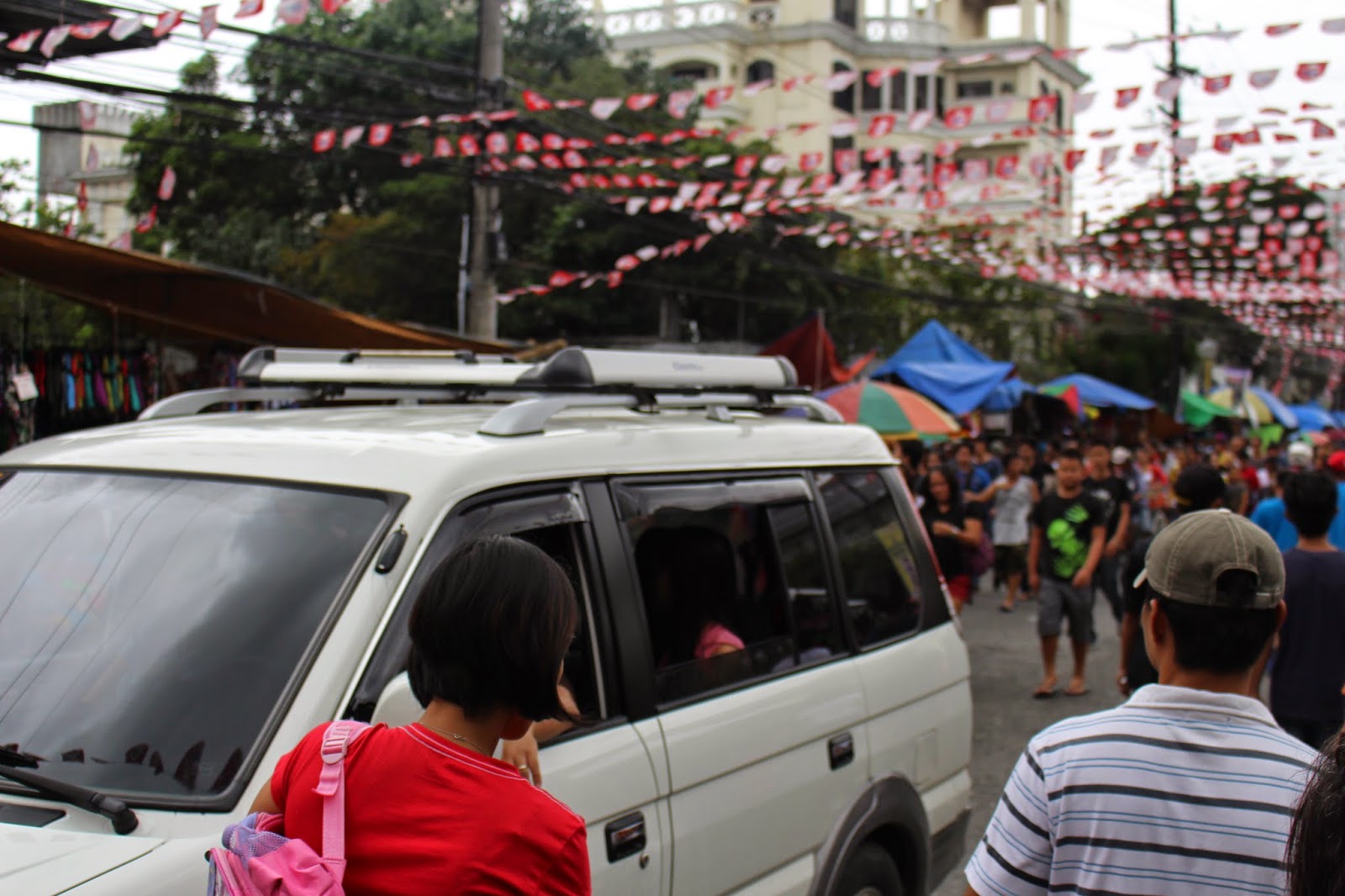 People who exempted themselves were ruthless and has no place in a society which respects equality.


SOCIAL FESTIVAL
As I have blogged in the past, the festival has to evolve so any members of society can enjoy the festival. I shared this idea  with Mr Bombette Marin of the Iloilo Provincial Tourism Planning Office that there can be designated areas for senior citizens, families with kids, handicapped and the poor to see the performers and they just bring their own stool or "bangko". If the airlines can organize their boarding of passengers accordingly, Iloilo City can organize people to see the festival in a better way--- accordingly.

CHANGE THE FORMAT
As in my previous blog, see link

I suggested that the streets will be divided into two areas, one is for the performers who will perform while dancing along these streets so many can see and it will be more alive and all can cheer, and the other side of the street is for the audience to sit with their own stools, just like watching a lawn tennis game. Each with designated zoning for senior citizens, children, handicapped and among others..  These will increase the spread of the audience as opposed to the limited and few performance areas. Last festival,  it was rather a sea of people in topsy turvy situations pushing each other no end.

The Dinagyang before without the monstrous props was better because all can see. I think these props are meant for a theater, since there is always the back side so those behind see only, well, the ugly back side. 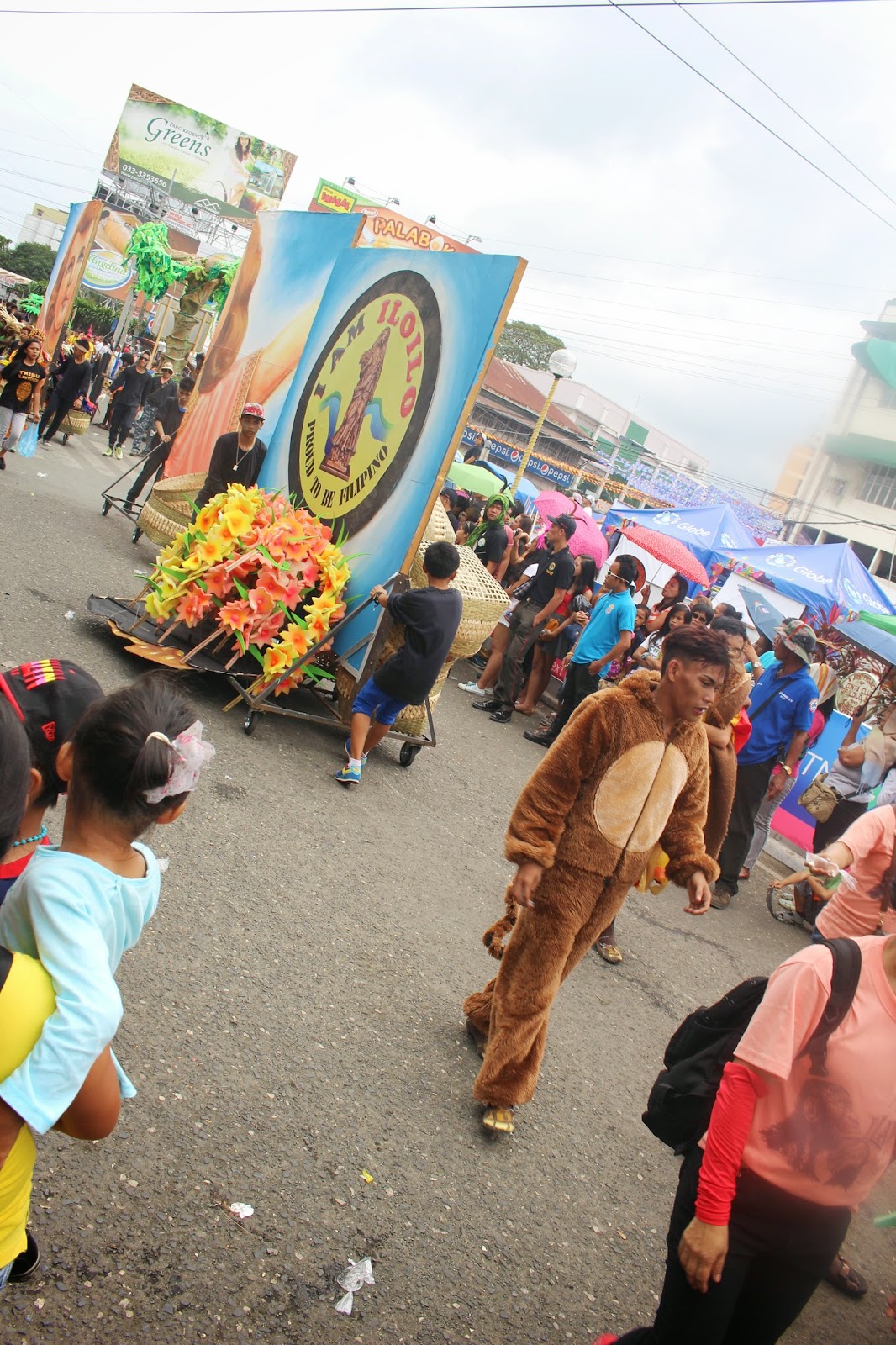 Huge props should go away , they are not audience friendly. They performed and walked away, too.

BEST FESTIVAL
If Dinagyang wants to remain to be one of the best festivals in the Philippines, and voted as such several times, it should consider the humanity behind a festival. It should not create a gap for the rich and poor, the privileged and commons.  It should consider the true meaning of a festival--like those in charming town festivals that all enjoy it irregardless of one's status in society.

I have been observing this for the past three years, and not much has changed. But I am positive the organizer will be sensitive enough to change it and become a pioneering festival that considers social responsibility to all members of our society.

Dinagyang has become a stressful festival to many.Let us be sensitive about this issue as a courtesy to our beloved Iloilo.