SONATA: The wonderful art of giving.

This is the first time  I will  blog on a film. I am a not a film critic. I am a simple movie goer. My love of films dates back as far as when I was a teener when my parents owned and operated a movie house in our home town in Iloilo. I had seen hundreds of films most of them are nothing but usual Filipino run-of-the mill movies.

I heard about the merits of  Sonata when I was in Bacolod few weeks back. There are no negative words from me about the film in this blog. So just read on some sweet lines here.

Sonata was the closing film of the Kasimanwa Film Festival held last 14 December 2013 at SM Cinema Iloilo CIty. It showed Ilonggo films in Western Visayas to raise funds for Yolanda survivors in the region.   Iloilo itself is a haven of hundreds of film makers—mostly of independent set-ups.

Sonata is a  film directed by Ilonggo  Peque Gallaga in tandem with Lore Reyes. I was invited to watch it  by Ilonggo Elvert de la Cruz Banares who is the film festival’s director.
They did a good job with this project, I must say. 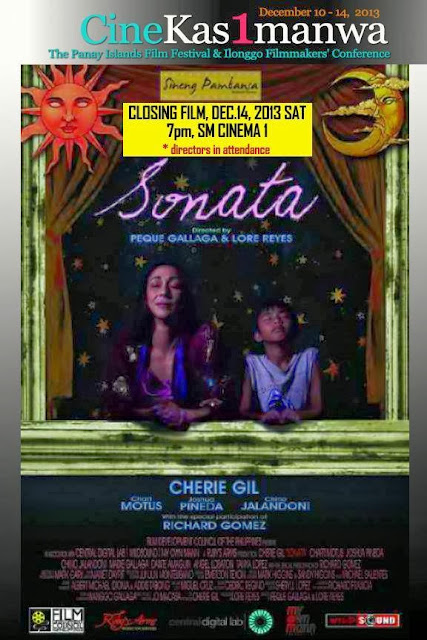 COPING UP. The story revolves around an almost insane and depressed woman in her menopausal age slash ex-opera star slash fallen diva slash hanciendera slash changed woman, Regina Cadena, played by seasoned actor Cherie Gil.  The other character is a young  bubbly boy Jonjon played by a good -looking  Negrense Carlo Jalandoni.  His memorable line is "Buang to sia?" ( Is she a mad woman?)

The movie will make real men cry. I did. One will shed a tear or two, because it is very Filipino in sentiment. The touching story is about our Filipino trait as very emotionally expressive human beings on earth. It dramatizes our resiliency. It echoes our abilities to rise again from our troubles--most of it are our own makings. It is a film on digging our emotional side than our often times irrational thinking.

HERITAGE. The film is set in Negros, somewhere near Bacolod, in a “bahay daku” ( big house) locally refered to as the ancestral homes of the old rich. The house transgresses into something more globally appealing because the old world of Europe  imprints distinctly on the imagery of the film.

The old Negros Antillan house has a sense of place. It anchors us of where we were in the past and how it becomes a contra-punto amid modernity of thinking and lifestyle compared with the old fashioned ways of living.

There is the “payag”  ( nipa hut), for the “sagadas” ( sugar cane planters) which creates the contrast of social complexities in the film.   I love the opera set design apart from the majestic scenery of the sprawling hacienda landscape captured in simple cinematography. The chiaroscuro of light and shadow is moving as the story itself.

DETAILS. I have eyes for details in films. The maquillage of Regina is fashionably awesome. Her wardrobe establish her character--sophisticated, wealthy, exposed and elegant. As a designer,  I thought her costume in the last act could have been a flowing skirt than a pair of pants as she looked more corporate in it. This is the most emotionally charged moment of Regina where her skirt could have vibrated the emotional turmoil within her.

MUSIC. I love classical music and to have Mozart or Puccini in a local film makes the film global. But there is the music of the insects at dusk, splatter of water as a frog jumps over a lotus flower in the pond or  even in the sound of  silence when one can only hear the pin dropping on an old distressed antique floor. Music is universal, a film like Sonata is universal in appeal, too. Regina shared with Jonjon this concept of universality. One need not understand a spoken language to appreciate music. Regina played roles in Tosca, Salome and Medea whose voice faltered after an operation.

Sonata as a title is derived from its main musical score. Mozart's Piano Sonata No..14 in C Sharp Minor known as Moonlight Sonata. Ergo, the visuals of Regina and Jonjon gazing at the moon. Along with is is Antonin Dvorak's famous aria "Mesicku na nebi hlubokem or known as Song to the Moon. Lovely. Just lovely.

LANGUAGES. Sonata is in Ilonggo mixed with Filipino, English and French. What is really more effective to an Ilonggo audience  like me is  I can relate to the emotions in local color when spoken in Ilonggo. I loved the word “ lagtok” in the film, for instance, which may not have an English equivalent to be more effective for Ilonggos to relate to. With English sub-title, it fascinates me how some Ilonggo essences of meaning can be lost in translation. With French, we associate that with sophistication. With rural folks, French means Chinese to them. But the vernacular really makes the Ilonggos roar with hearty laughters. It is just time to say, we are at home.

TEACHING CHILDREN. We as adults are destined to teach the young ones. But Jonjon, a ten years old, taught Regina to live again.  We as adults forget to enjoy the child-like in us that we swallow ourselves with self- centeredness and self- righteousness. The transformative movements of Jonjon's modest ways for Regina to recover her senses is so charming, in fact, so unassuming, it can blew one's senses. One can wish each one of us will be like Jonjon.

MOTHER AND CHILD. The film tells us there is nothing more powerful that breeding our children with the old ways of doing things in rural areas—away from the maddening city malls and worldly discos. We all need to polarize the fast speed of the city with the charm of the province. Go home. Immerse in nature with your birthplace.

The message is we go back to our roots because it will anchor us who we are and where we were coming from. We do not pretend. Filipinos always want to rest in our homeland soil ultimately. Our umbilical cord is connected from where we were born.The reason Jonjon prefers to talk in Ilonggo even when he lives in Manila bespeaks  of this sense of connection. " Ano na inyo lenguaje, man? Hindi ako maka intiende" he said to Regina whom he heard speaking in French.

CHEERS TO CHERIE. She can win a best actress award. Her “selfie”  images before mirrors  portrays a typical habit of us today---the macro images of our vanities. Hands down for her splendid performance. She portrays the typical us in lifestyles that scream we all just love ourselves too much beyond limits. This is when Jonjon made Regina realize that there are simple things in life beyond ourselves  that we can do and share with others like offering wild flowers on our dining table or enjoying some crunchy “tubo” ( sugarcane) with friends. Jonjon little acts of helping Regina get out of her depression is bigger than life, even higher than his miniscule size. 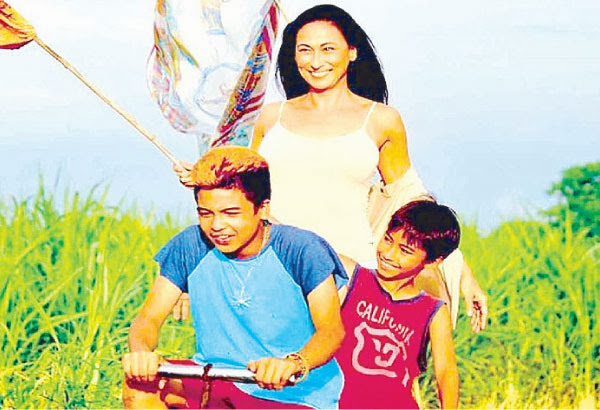 NEXT JOEL TORRE’s. Carlo Jalandoni and Joshua Pineda could be the next Joel Torre. These boys can act. Their hearts are pure. They show them in their eyes. Their Ilonggo is so crisp, one can not help but savour the sense of  belonging  closer to our culture and sense of origin.


FILIPINO VALUES. Sonata is a film appropriate at this time when so many Yolanda survivors lost their loved ones. How Filipinos may accept death when our loved ones were very much being alive one day and suddenly gone. How can one accept the loss when a family member is gone whose presence  just heals others of their unhappiness? Sonata is filled with pains and joys, of wanting happiness but not having it.

FILIPINOS FORGET AND FORGIVE SOONEST
The value of forgiving has the greatest learning impact to me in this film.  Jonjon dies and her mother Cora (Ilongga Chart Motus), separated from her husband, has only him as a companion in life, yet Cora forgives Jonjon’s friend Ping  who asks for it with his knees kneeling down. Cora is very giving to pardon Ping, an innocent soul. She lost her only son. Ping wishes he dies than her son because he thinks, which he isn't,  he is a worthless friend to Jonjon by not taking care of him.

Many said the end has too much prolonged emotional drama but I thought it is very Filipino. We do not subdue our emotions, we cry out loud. We linger. We do not let go easily. It is when we cry that our senses of acceptance will appear before us without remorse---with or without Yolanda.

We may have lost some loved ones, we refused to face it, yet one day we gained some acceptance. Then, we re-live.
Posted by Life and Style at 02:09